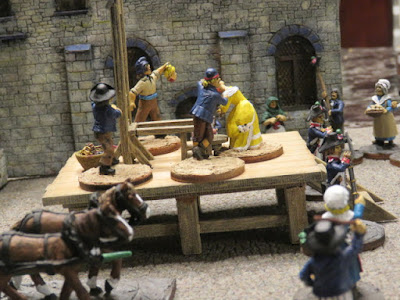 The project I wanted to work on for so long if now complete. The set always looked like fun and it is unique. It took me a bit longer than I expected to finish it than I anticipated but I'm happy with the overall results.

While browsing online for how others painted their Parisian mob and guillotine crew, I noticed a lot of bland colors. I really wanted to avoid that as being more of a fashion epicenter of Europe, I would expect more color. Given the uniforms of the time, this seemed like a good idea. 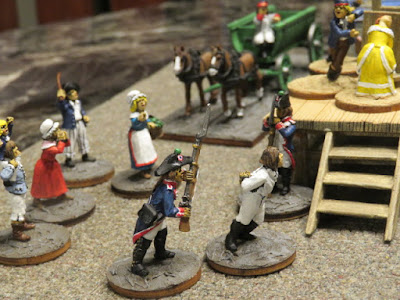 One figure that gave me pause was the man here in white. I couldn't figure out what to do with him with regards to painting. It does appear the sculptor's intent was to show the man without a jacket and with the white linen undershirt. It might have been boring but it had to be that way.

The yellow dress on the lady on the platform draws the eyes to the center of the spectacle. 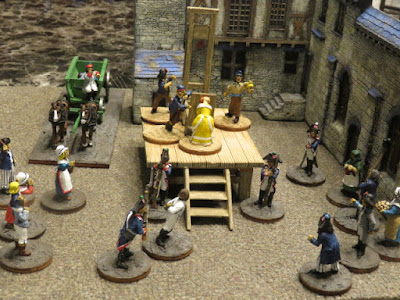 All the Eureka miniatures of this set were very nicely cast. All details were clear and little mould lines could be found.

The platform on the guillotine set is actual wood while the rest of the set is white metal. I did a medium brown followed by Vallejo Iraqi Sand dry brushing to get the color up to match the wood. I like how it came out and wasn't as complicated as I would have initially thought. 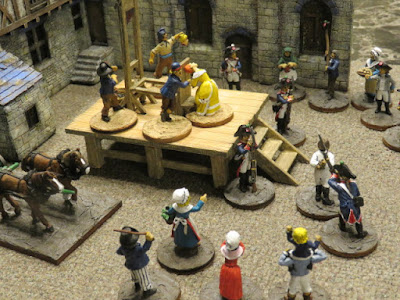 I used similar dry brushing on the bases of the figures. Using 1"diameter wood bases, I used Liquitex light modelling paste to even out the base of the figure with the wooden base. That also added texture which was good for dry brushing colors to match where these figures would be standing. 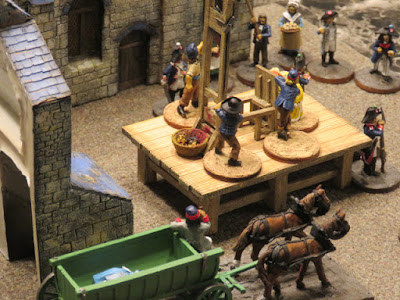 The corpse wagon has a couple of headless nobles in the back as the driver smokes a pipe.

For the guillotine, I was unsure how blood should be added around it. I thought of finding a few ISIS videos for seeing how much blood spurting should occur, but searching for such videos would probably insure I make some special list. I think I got it about right. 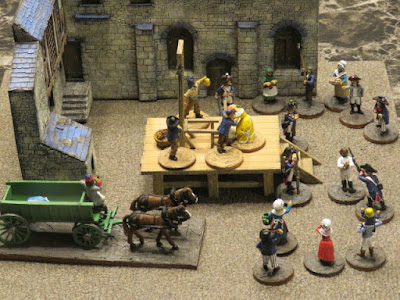 A better overall picture of the entire set. 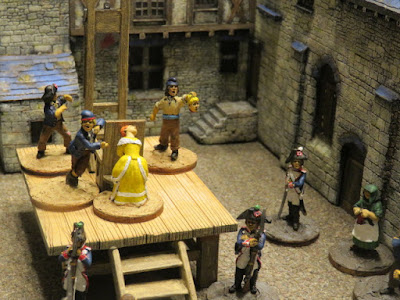 A lot of character went into the sculpting of the mob for this set. I chose not to rush through it even though this was certainly a diversion for any productive painting for the gaming table.

Maybe one day I'll find a scenario to use it in for a skirmish game.