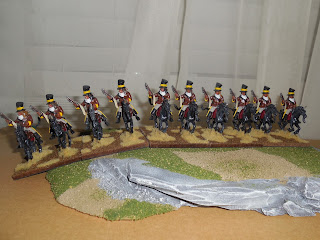 One of my final units for this force was a guerrilla cavalry unit. One of the nice features in Flintloque is the ability of the Catalucian Guerrillas to alter some of their stats by subtracting from one category and adding to another. The cavalry is a bit limited in this sense in that they have no shooting stats to deduct some points to add to the melee factor. This might seem a bit disadvantageous, but their stats are quite good considering what they're representing. 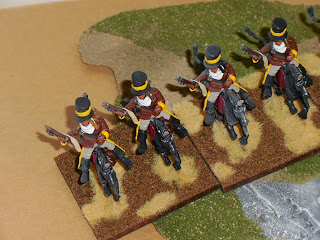 In my first battle with them, they were the big show stopper. I kept them in reserve for a grand opportunity to pounce on an enemy when they weren't expecting it. Some Ferach line infantry turned a flank to these guerrillas thinking the forest would prevent a charge. Forming into column and then using a melee card for the charge bonus in distance and +3 to the melee factor, the Ferach troops were smacked around thoroughly and tossed back. The Ferach dragoon unit that came up suffered similar results with a minor melee card they were routed and then practically finished off by some artillery as they ran. The guerrilla cavalry's stats are quite similar to the enemies they would commonly encounter. No need to adjust their stats, they're quite good as is. 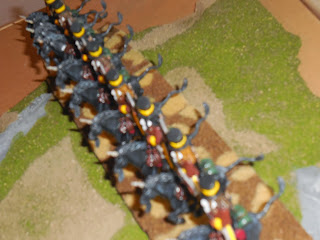 I decided on a basic brown uniform and catching the eye with a nice yellow that is repeated on the hat, cuffs and trouser stripes along the outer seam. The unicorn was the portion I simply had to reject on the Alternative Armies website. White? Elves on unicorns is hard enough to swallow, but at least dark elves riding dark unicorns isn't so silly. I did them with pure black and heavy highlighting of grey to give it more depth. Considering the alternative, I believe it came out nicely. 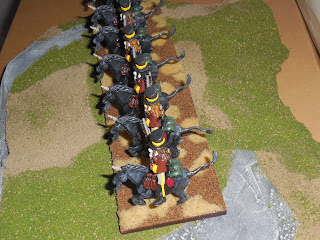 Perhaps in spring I'll work on a final line unit and use up some of the spare figures I have on hand. With my son being born a couple of months ago, painting and free time ain't what it used to be. In the next post I'll show off some 15mm AB French I've been painting to replace the Old Glory infantry units.
Posted by Vive l'Empereur at 7:43 PM 2 comments: 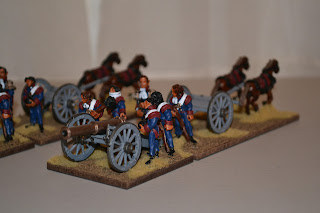 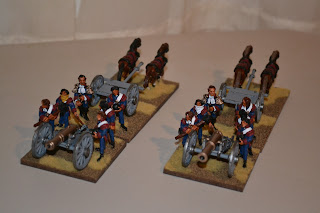 So after a few months of work, I've gotten through these units and finished up the basing. Seen here are a heavy and medium gun along with limbers. Limbers in this game are not necessary and due to their scale, only have two horses rather than the larger teams that would exist in real life. In any event, such details add to the game. 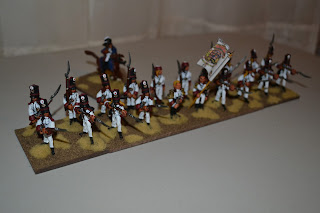 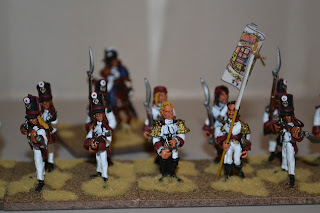 The line unit, pictured again with the general, but with finished bases. I may raise a second line battalion, however their tactical worth is of little value even if they are cheap point wise. 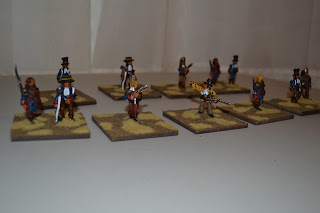 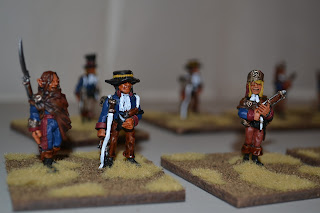 The first guerrilla unit seen here. In this game, the guerrillas are better than the line units and you can adjust certain stats by taking away from some categories and adding to others. Perhaps a scenario might make you desire to have better shooters than melee troops, then these stats can be adjusted to a degree. Seeing how they are skirmishers, enhancing their shooting abilities would be a wise idea in most cases. 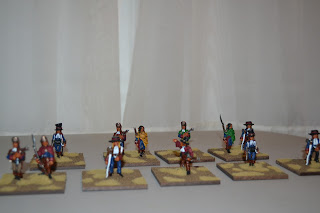 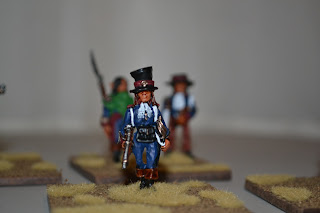 The final unit that will be added in the near future will be a guerrilla cavalry unit when I get around to ordering a couple of more blisters to fill out the unit. Considering how small our games are, I won't need anything more than that to field a complete force for our 1,000-1,500pt games.
Posted by Vive l'Empereur at 9:21 PM 2 comments: 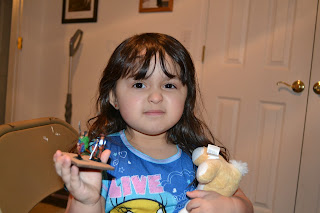 For those who may not have known, some wiley Scots with a very unusual sense of humor created a fantasy line centered around the Napoleonic Wars. Their real introduction came around the skirmish version known as Flintloque and then expanded into larger battles called Slaughterloo. The Elves are French and Dark Elves are Spanish, otters are the Ottomans, dogs are the Austrians, ogres are Confederation of the Rhine, undead are Russians, English and Irish are Orcs (most fitting of all), Portuguese as goblins, the Scots are rats and Italians are toads. Leave anyone out?

So many, many years ago as a child, I played a demo game set up at a game shop. Richard Sharpe was there as Richard Sharke and the game was fun, if somewhat hard to take in visually. It doesn't play like fantasy, so other than some odd looking creatures wearing coats with turnbacks and shakos, it plays like a Napoleonic game. I had purchased the Ferach and Toadini (French and Italians in our thinking) and ended up painting them and trading them off several years later.

That friend I traded them to, had added to his collection troops for every one of the nations now. His only hole in his collection was the Catalucian Dark Elves. Having painted many Spanish in 15mm, painting some 28mm ones wasn't much of a stretch. Since they were free to me if I painted them, I've been working on filling out this force and painting it all up. 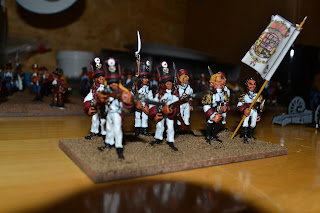 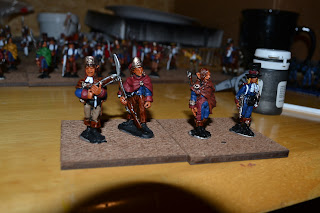 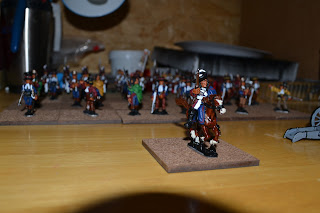 I went ahead and decided to paint the line troops according to the army book's depiction rather in the later British supplied blue of the 1812 uniforms. The guerrillas didn't have any real uniform but I used a lot of blue as many of the militias were fond of it. Alternative Armies only made one general figure for this line named Don Juan.

I bought a couple of packs to bulk up the guerrilla units as they are better than the line units. The artillerymen, guns & limbers are still on the painting table. Cavalry will be last. I will wait to do all the grass on the stands when everything is painted up. The line units are a maximum of 20 figures, light/guerrilla infantry are 12 figures and the cavalry as 10 figures. The goal is 2 line, two guerrilla units, 2 guns & limbers and 1 guerrilla cavalry unit. I'm about half way there now. I may even be able to get them on the table for a game by spring. 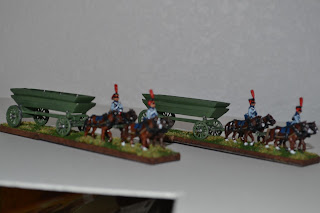 So late last year in an earlier post back in December, I purchased a couple of pontoon wagons and a pontoon bridge. I decided to post the follow up showing full completion of both. 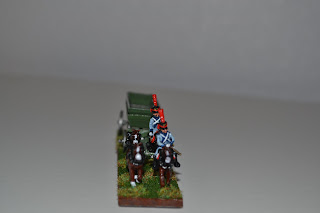 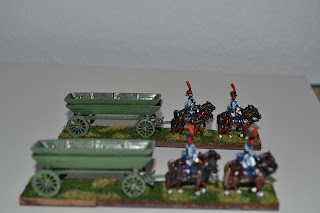 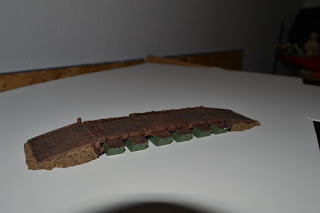 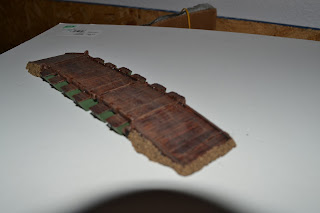 The pontoon bridge will likely be used least of all, but might be interesting for an 1809 Rhine campaign someday. The pontoon wagons could work for the same theater or of the second invasion of Portugal when a group of pontoon wagons were taken with the army for a possible river crossing. In any event, they are novelty items and something really only a collector would seriously entertain painting.
Posted by Vive l'Empereur at 9:16 PM 3 comments: 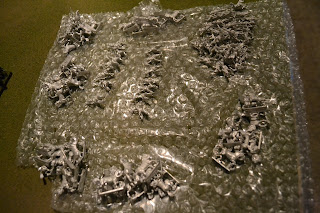 Recently I won an eBay auction for 57 AB French dragoons. Seeing how I've already constructed the units I need for the games I play, there wasn't a lot of purpose in me even considering this auction. I made a solid bid for about 2/3rds of the full price and managed to get it for even less. A real bargain if not a firm need for it. 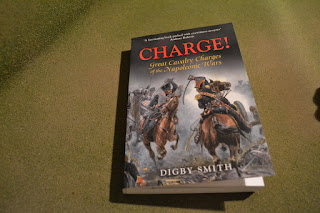 Although no fan of "Digby Smith" or his biased writing style, his book focusing on cavalry engagements of the Napoleonic wars is an interesting read. I had an idea of doing a diorama scene perhaps against some enemy infantry forming up in a square. Since these dragoons are waving their swords as if charging, it seemed appropriate enough.

So I'm interested if anyone has any thoughts on what to exactly do with them? There are quite a few guidons to get rid of, but a firm 50 or so would be impressive in some sort of scene. Most of what I find (historically) isn't dragoons but of cuirassier or lancers doing some menacing of infantry. Perhaps against Spanish in a broken mob of a square? Open to any and all suggestions.

Posted by Vive l'Empereur at 8:04 PM No comments: