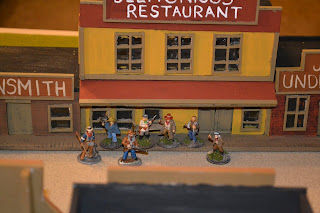 New set of rules are being played this day. Welcome to Bellevue, Iowa. April 1, 1840 saw wealthy hotelier W. W. Brown defend himself against political rival Thomas Cox. Through a series of small events, Cox believed Brown to have criminal affiliations and quite frankly, being in the way of climbing the political ladder. Through some unclear connections, Sheriff W. A. Warren and a posse went to enforce a warrant against Brown. Brown was appreciated by the locals in the town for offering employment and decent wages to locals. New settlers to the area were changing the status quo. 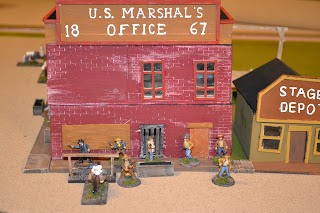 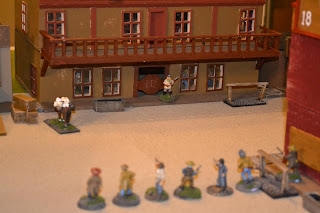 When April 1 came, the two factions first attempted to negotiate through parlay. In the afternoon, Warren traveled to Brown's hotel to read the warrant. Shortly thereafter, Cox arrived with the posse. Although a large group of citizens were standing at Brown's defense, they quickly scattered when they saw Cox's posse marching with military discipline. Unable to come to terms, Warren left the hotel and Cox's posse advanced. Brown stood in the door of the hotel holding a rifle. Cox demanded his surrender, and apparently Brown complied and lowered his weapon. However, while doing so, he accidentally discharged it. The ensuing bullet ripped through Cox's coat. The opening gun fire had Brown wounded while inflicting a wound upon Cox. 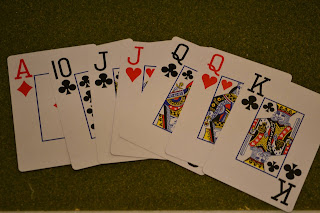 With the initial shooting and game opening move, we draw cards for individual initiative. As one can see, I drew an exceptional hand to begin the game. The Queen of Hearts allowed the automatic healing of the wound on Brown. Things are looking good for me. 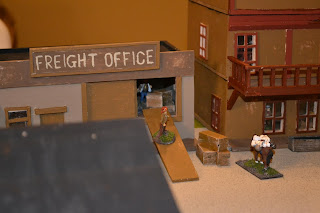 The bystander on the loading dock can be ignored. Further back behind the crates, a couple of Brown's friends who also opened fire upon the bold posse. 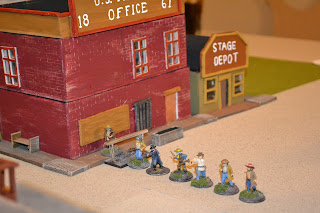 The posse drew a fair hand and returned fire. Overconfident or just plain surprised by resistance to their perceived status, they chose to stand in the open and return fire. 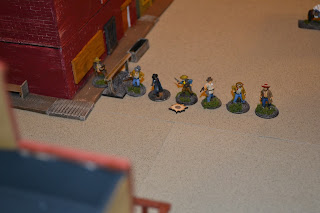 The wound marker finally got placed on Cox (forgot to do that earlier). One of many about to be placed upon the table as this erupts. 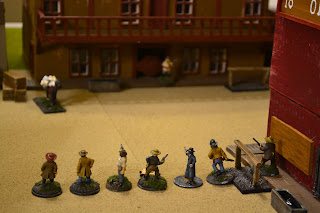 The Wounded Brown takes another shot, missing, before slipping back into his hotel for cover. He has four other friends in the hotel backing him up. 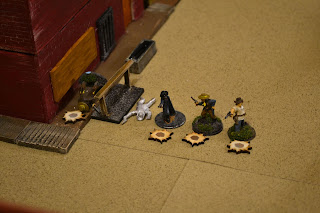 And the casualties mount. Dead figure markers weren't yet painted (low level priority), but the buildings were all finished. One of the posse is dead, five are wounded. 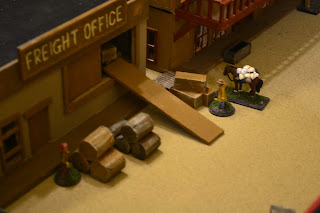 The unwounded member of the posse decides to rush the freight office and take up cover. This might seem crazy but it will soon pay off. Sometimes fortune favors the bold. 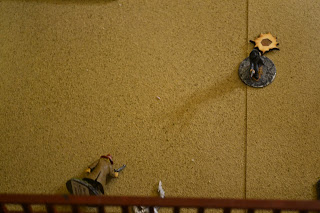 One of Brown's band came out on to the balcony to shoot. A wounded posse member advanced and managed to quickly kill the man. For dramatic effect, we claimed he fell from the balcony in some Hollywood style dramatization. 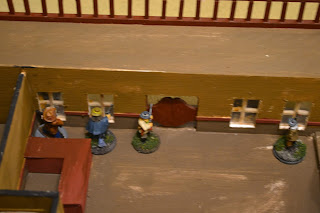 With the roof and top floor removed, one can see Brown and a few good friends defending the hotel a la Haye Saint style. 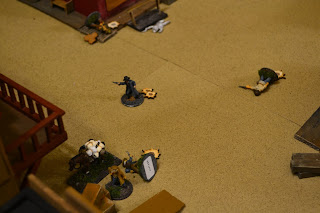 The posse continues to get hit and it is beginning to occur to them to either get closer or seek cover. A couple of downed posse members will need to pass a test to get up and become functional again. Both managed to pull themselves up under the hail of lead. 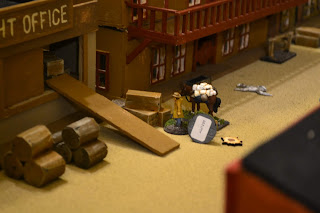 The standing posse member seen here, manages to score a clean kill against one of the two members of Brown's band in the Freight Office. The other member tried to return fire at the posse member but his revolver jammed! 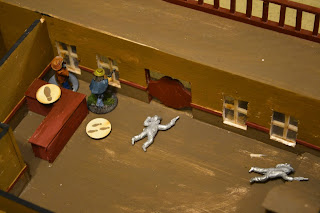 The other posse members had some remarkable fortune as they cleanly killed Brown and another associate behind cover. How quickly the tied has turned and suddenly the Brown gang is at an end. 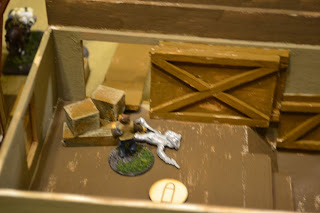 The Freight Office is a loss with one dead and the survivor with a jammed weapon. With over 50% dead, including Brown, the sun sets and the scenario ends. The political rivalry is at an end.
Posted by Vive l'Empereur at 12:10 PM 2 comments: