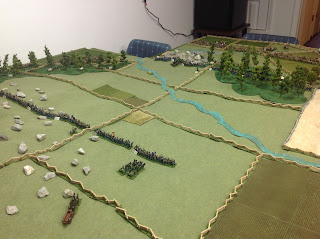 The group had played Day 1 of Gettysburg and now onto day 2. Since I haven't posted anything in a while, I thought I'd share this even if the pictures aren't close ups. This view is looking down from Power's Hill toward Little Round Top on the left. 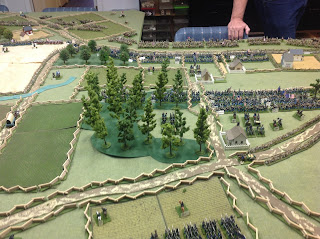 Part of the Union center engaged against A.P. Hill. Some of Longstreet's corps can be seen in the upper left. It may not seem like it, but there are around 8,500 figures on this table. 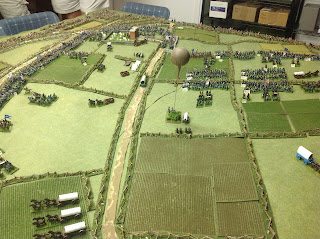 Another view of the center facing toward Cemetery Hill. Lots of fresh Union troops await any Confederate break through. 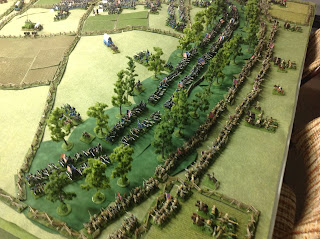 Ewell's corps on the extreme left. The attacking up hill through the woods would prove inconclusive and bloody. 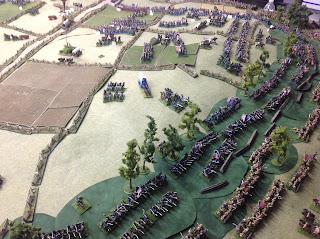 The rest of Ewell's corps wrapping around Culp's Hill. As in real life, the wooded hills proved to be too difficult to attack successfully. The Union was able to move reinforcements around to reinforce any point when needed. The Confederates did not have any reinforcements. This was the corps I commanded and although I made some holes here by the end of the game, Union troops held in reserve were waiting with artillery. 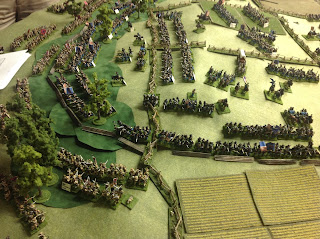 At the "fish hook", the defense was still just as good as Union troops were firmly behind breastworks. Other than charging in and hoping for a good die roll, there wasn't much to be done. You can't really stand off and trade shots and charging means trying to dislodge defenders on favorable ground. 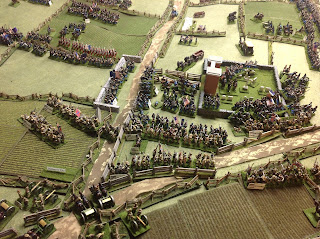 The stone walls worked very much in the Union favor. Being unable to effectively weaken your target before closing in makes for combats that just chew up units. 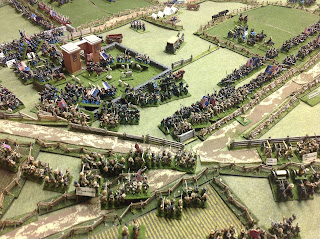 We did try to attack this corner repeatedly but the defenses held out. The Union brought over several regiments from their reserve to reinforce the position with fresh troops. Near the end of the game some progress was made by the Confederates in trying to crack the position but the Union reinforcements arrived in time and reversed the push. 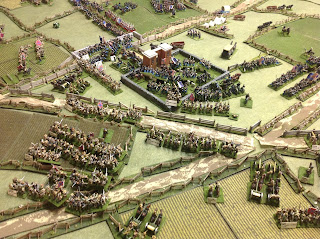 One can see a lot of Confederates stacked up here waiting for their break. We had the intention of breaking this corner and then rolling up both ends of the lines. Even with more time, not sure it could have been done. Their ability to bring over fresh units meant the Confederates had to fight superior numbers looking down from their high ground positions. 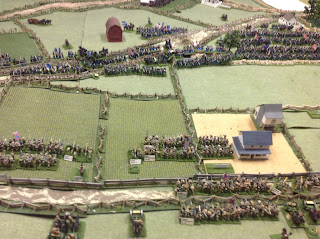 The center was mostly a holding action as the Confederates had optimism either Little Round Top or Cemetery Hill would be taken. Wasn't a whole lot of movement during the game so the positions stayed mostly where they began. The Confederates weren't successful this day, so Pickett's men may have to be called up.
Posted by Vive l'Empereur at 8:47 AM 2 comments: