After being directed to a post on columns verses lines in Lasalle, I made a suggestion for what I believe was a more constructive approach to dealing with the situation as opposed to some of the suggestions listed on the post. This was not the first time I had run across the issue, as it creeps into all Napoleonic rules to one degree or another. Although I do not recognize this to the level as a problem, I do see an historical point of view that was never addressed for point blank volley fire into deep formations. So, the rule used in this scenario as an experiment is:

An experienced infantry battalion in line, firing into an enemy unit in attack column or waves formation, may double shooting dice if within 2BW. 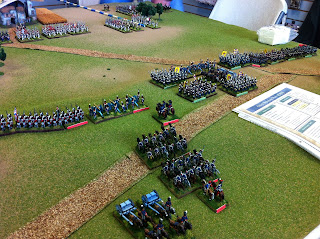 The latest store battle using Lasalle. This was a six player game with the French having a fair numerical advantage but the Anglo-Portuguese having a better position with concealment, if needed. It was a classic slug fest biding for supremacy of the field. Here we see the Portuguese contingent on the Allied right flank and in the background, the French left wing. The Allies had a numerical advantage on this flank. 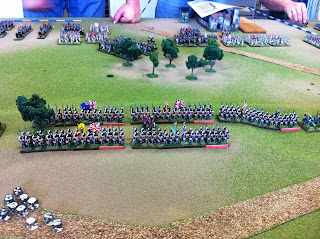 I commanded the Allied center, which was to turn out to be the only part of the line that held. I'm certain this was due to the more aggressive nature of the French commanders on the flanks than my commanding. 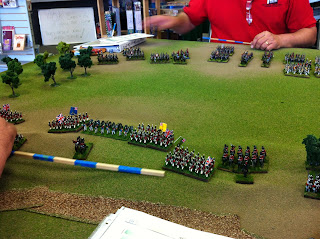 This is the Allied left flank. Opposing them is an entire division of French dragoons and a brigade of infantry. This was to be the flank that decided the entire battle and would see the fiercest fighting. 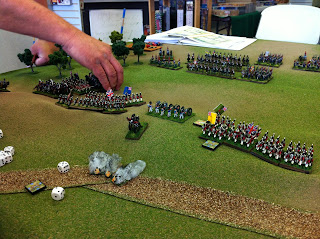 Early in the battle the French dragoons were quite impulsive and made some rash charges which largely worked. The British square here manages to push back the dragoons but only for a moment. The French artillery is managing to soften up the defenders along the ridge which will be important later on during combat. 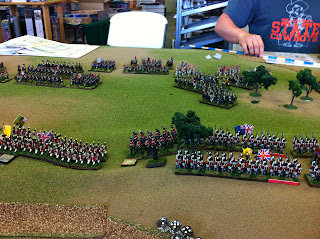 This will be the last image of the Scots Greys in the center. They were subsequently charged and routed off the field in one really decisive combat. Some more exchanges of cannons fire back and forth and little effect for either side. 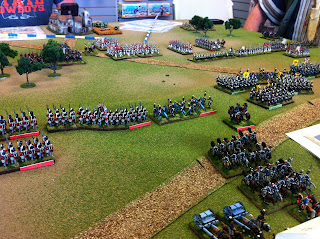 On the Allied right, the Portuguese units with a Brunswicker battalion mixed in for fun, stand awaiting the rapidly approaching French. The French player on this particular wing seemed to be aggressive in wanting to engage but uncertain as to what formation to use. As it will turn out, multiple units will repeatedly change formation. 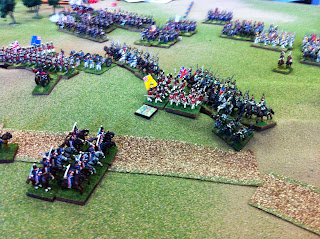 Back to the Allied left flank, the front British battalion was unable to pass a discipline test to form a hasty square and was promptly swept from the field. The rear battalion did manage to form square as normal and repulse the dragoons. Attempting to plug the gap, some British light dragoons came from the far left to try and cover the breech from the Scots Greys. The Royal Horse Artillery battery chose to stand its ground and fire into the chargers and take its chances in the melee. Clearly, that was a gamble. 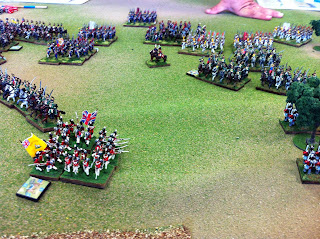 With the artillery slaughtered (no surprise there), the square was a bit isolated and quickly going to be facing multiple cavalry units unless things change. The French artillery on this sector was now silenced due to the inability to have a clear path to any target. From this point on, this flank only managed to turn into a series of melees as the cavalry show no fear of the British battalions who were too spread out to support each other. 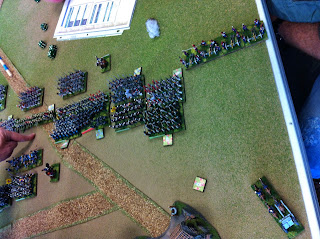 On the Allied right flank, the French move the artillery up close and canister the far flanking Cacadore unit. Over a few turns of longshot and canister, it was blown away. The series of melees here should have been in the Allied favor if for no other reason than sheer numbers. Due to the disadvantageous attack column the Allied player chose for a defensive formation, the fire power was reduced. This formation did allow more numbers to be brought to bear on a reduced frontage, however it did not provide and reserve to plug holes. It also could not return fire with as much power. 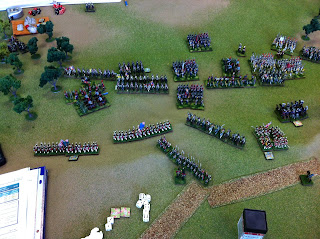 The French player on this wing was using a tactic used more frequently by the Prussians in 1813-1814. Cavalry come up, force the infantry into square while artillery and infantry take advantage of the situation. Here the Allied commander was facing odds not in his favor and can be excused for not being able to repulse everything thrown at him. 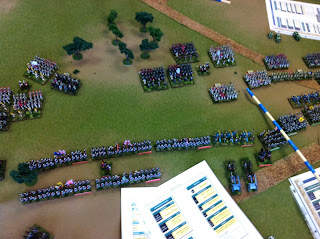 Here we see my opposite moving his forces toward the flank rather than smack dab into the center lines. My artillery played against these columns, but not enough to slow any of the approaching battalions down. Perhaps the Portuguese were seen as the weaker link. 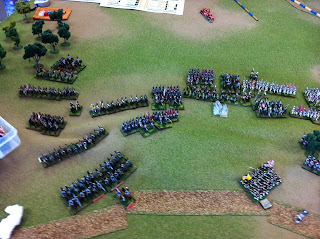 My hussars had been shifted to cover the collapsing Allied left flank and as they arrived, two more British battalions routed. The light dragoons also were beaten off the hill and the great turning movement was made by the French. Both of my hussar units are lining up to charge the victorious French dragoons who moved up too far forward when consolidating their position. 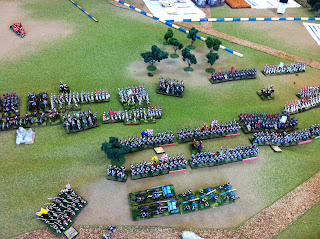 Here in the center, my artillery fired canister until charged. Managing to limber up, they evaded contact with the opposing French battalion and moved to the rear. I then moved them off to try to slow the French tide on my left. My far right battalion (69th Foot) was charged by both the 1er and 2ème battalions of the 4ème Légère. The 69th did some good shooting and only suffered a minor push back from the combat. Here the shooting rule did allow me to easily inflict one casualty on each battalion. 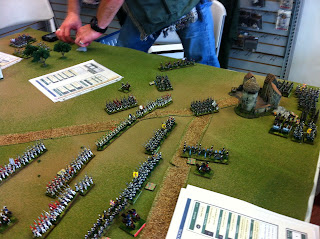 Alas, the Allied right was outflanked to match the other flank. The dead pile on the upper right is quite lopsided when seen to the French dead pile of only one battalion on the upper left of the picture. Even if the break point for the army had not been reached at this point, the Allied player here had clearly a confused defensive strategy. The French may have changed from march column to attack column to line, but the Allied general here couldn't be bothered with dynamic tactics. Not pictured, but on the opposite flank my hussars managed to route the French dragoon unit opposed to it and that act concluded the battle.

In review, the adjusted rule for opposing columns was not as well used here as it could have been. Primarily, the Allied right was never able to exercise it and the center was only able to use it near the end of the battle. Ironically enough, the French managed to use it more effectively against the uninspired Allied right that remained in attack column. This explains why the French here formed into line and did put it to good use. The adjustment is not a game changer by any stretch of the imagination, however it is a bit more formidable than as written currently in the rule book. I believe for the mean time, I will retain it until something changes my mind.
Posted by Vive l'Empereur at 9:52 PM 5 comments: 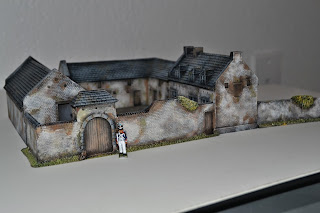 In the previous post I stated I would do a follow up once I had the La Haye Sainte kit in hand. Literally one week from when Denise at Master Class Terrain Painting received it, I had it back on my door step. This post would have gone up earlier but I was busy with a variety of things. 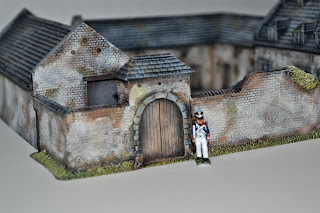 The package arrived packed well enough. I was asked to follow up with a comparison of a figure for reference in scale. An 18mm AB French sergeant is being used here. As you can see, the scale is just great. As for the painting... 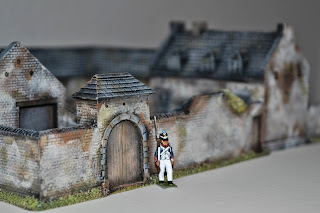 Well who could complain! The coloring is quite realistic and appears to be as if you're looking at the genuine specimen. Since the real building is painted brick, paint does wear thin over time as sun and rain takes its toll. 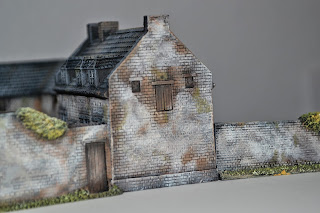 The wood on the doors and shutters appears as real wood ought to appear. If La Haye Sainte had painted wood, there isn't much documentation to represent it. 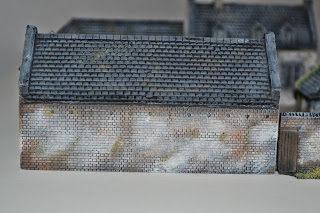 The uneven weathering of the roof is apparent in this image. The uniform, eveness we see today is a result of factory production instead of local shops turning out batches with possible variations. 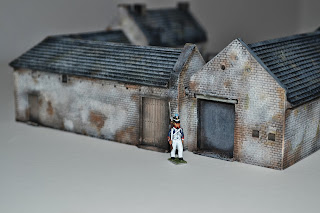 Here we see the rear of the farm. Again, weathering applied quite well to enforce a realistic appearance. All the small brickwork still evident in the model and the painting. No heavy-handed dry brushing going on here. 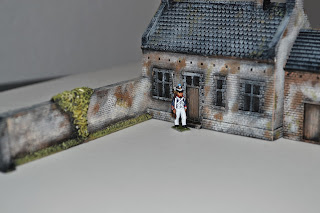 Here the side door has stone work around the windows that is picked out with subtle greys. All the various weathering with the green vine gives it a good look. Denise really took time blending colors so as to avoid sharp and harsh transitions that I was hoping to avoid. My instructions weren't too detailed, just weathering being a prime concern. This complex was not new at the time of the battle and I didn't want it to appear like a cartoonish version with overly-bright colors and sharp lines defining transition. 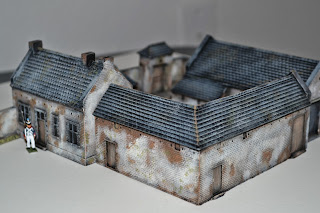 Denise exceeded what I had expected this kit could look like in my mind. She was quick to respond with questions and updates. Some people we deal with in the miniature or painting business display an almost apathetical attitude toward customers, but not so with her. Followers of this blog may recall my other buildings she did as seen here: http://thepeninsularwar.blogspot.com/2011/02/review-sabol-designs-spanish-villages.html

Her skills are truly honed to a rare state of perfection that most modelers hope to achieve at some point in their life. From reviewing her other work on her site: http://www.masterclassterrain.com/, one can see she's not some amateur. If you are considering having some terrain painted up nice so that it will enhance your gaming table and impress your friends, then give her a try. In the future, I will be sending more terrain her way and will keep the blog updated with new terrain as it all happens.
Posted by Vive l'Empereur at 9:20 PM 3 comments: