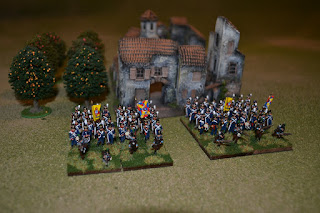 I received an email from a friend wondering where I had gone since my blog was so quite. As it turned out, I was busy with many things and got plenty accomplished for the upcoming year. After months of almost nonstop painting, I have about burned myself out for a while. The great thing that resulted from this work is that I have almost next to nothing I need to paint anymore and can just do what I want instead of what I need to play historical scenarios.

I needed a couple of replacement Portuguese units because I traded away some Essex Portuguese units that did not match my collection in either size or exact pattern of the uniform (they had the stove pipe instead of the Berretina that I preferred). 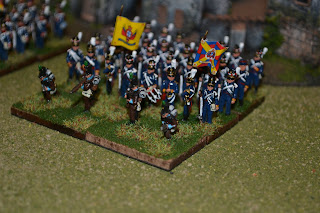 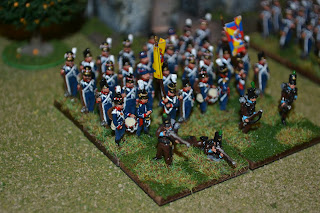 This now brings me up to seven units. Figures are AB. I may add more units so as to give me an excuse to play Vittoria. 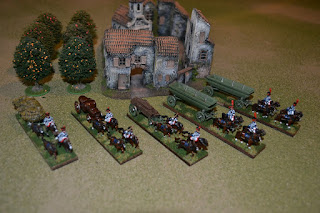 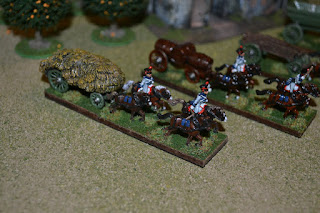 The first two wagons clearly visible here are from Hallmark figures, with the limber crews from Old Glory. The hay wagon I found fun to paint and it painted up well. The second is carrying barrels which might contain liquors, water, gun powder or a variety of things depending on a scenario. I left it brown to reflect it was a requisitioned vehicle. I have some spare AB British limber teams that may also get to share this wagon. 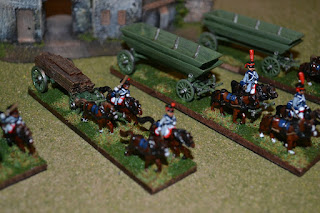 The first wagon is also a Hallmark wagon with Old Glory limber crews. Having a lumber wagon to go with the two pontoon wagons just seemed like the natural thing to do. The pontoon wagons painted up well and it is unfortunate they are so long and will take up quite a bit of table space. Surely unique, as I didn't even know pontoon sets existed until I ran across the unopened packs from the 80's. Even being true 15mm scale, they fit right in. 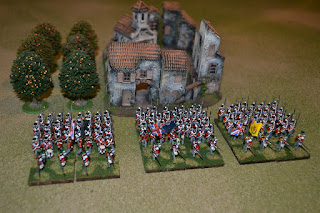 Here are three British units I painted over the summer. There unit names escape me at the moment, but the figures are from Eureka. 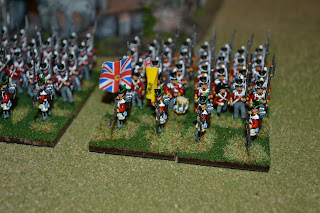 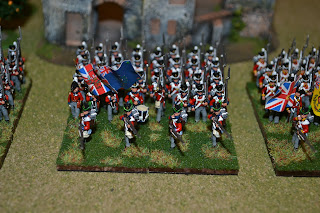 I prefer the Belgic over the Stovepipe. Minor details really. 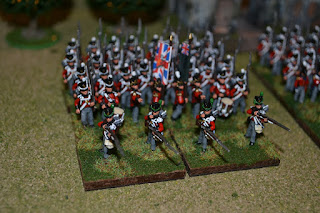 I believe they came out quite well. Poses are a little static, but I do prefer the march attack pose over the advancing pose. 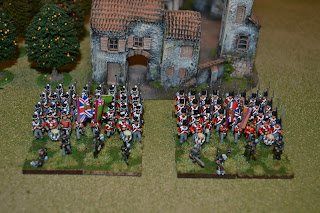 Here are two more British units I painted during the month of November. 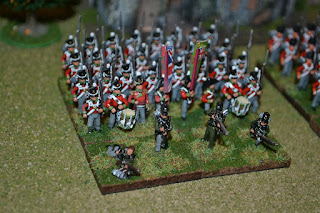 These two units I remember, this is the Herefordshire 36th Foot. 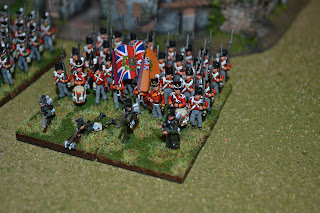 And this is the Sussex 35th Foot. This unit did not fight in the Peninsular Theater, but it did serve in Egypt, Italy and later at Waterloo. I love the orange facings, an uncommon facing color in the British army. 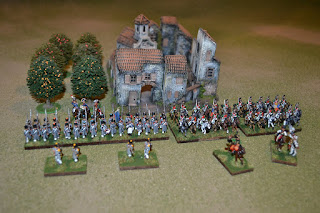 And last we come to the French I got to. Since I had some extra skirmishing voltiguers in overcoats from the first unit in overcoats I have, I decided to do another. 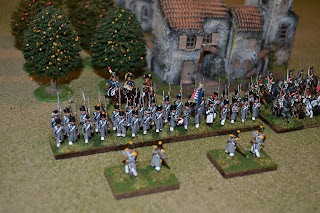 The infantry is just a generic unit, not so worried about making them anything in particular because you just can't tell! The sapper on the command stand I think adds to the visual appearance of the unit. In the background behind the infantry is Marmont and an ADC with maps and some confused Colonel scratching his head. I will use this is my refight on the Salamanca game as it fits in so well. 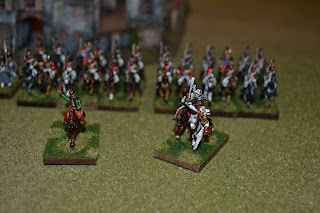 In the background, a couple of units of AB French dragoons are being lead by Murat and General Lasalle. Got both of these figures in a bag of Old Glory command figures and decided to paint them up because they are used in some scenarios and it's best to have accurate figures. 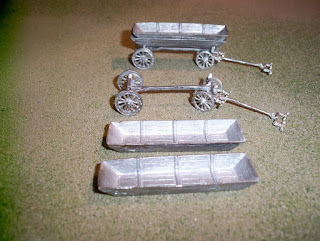 After being away from blogging from a while (which my next post will show why exactly), I decided to show my next project off. I'm going to be posting more regularly now, so you won't have to wonder why this blog went quiet. You rarely see these pontoon figures and it is clear why as almost no company makes them! Pontoon trains seemingly get ignored, much as limbers do, however they are an incredibly significant part of an army while on campaign. 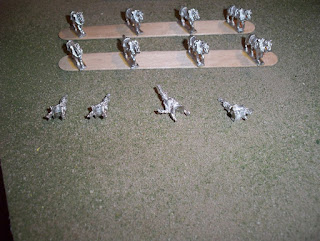 The pontoon wagon chassis and pontoons are from Minifigs. Being the only company that made them in 15mm, there wasn't any other choice. The rear wheels are from Old Glory which are much closer to the 18mm world that our 15mm figures now inhabit. The front and the horse teams are simply an AB French limber set. The pontoons were a little over sized for true 15mm oddly enough, so this conversion works out quite well. 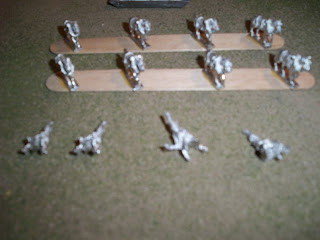 I picked up the Minifigs pontoon set from a friend who had two unopened blisters that he wanted to get rid of. I paid $10 for each, which was their original cost. Each pack had both Austrian and generic workers in action for construction, however since the figures were true 15mm, they would not work with my armies that I have at the moment. It appears that I will have to simply make the trains, pontoon bridge and lumber wagon (in next post) work as a convincing pontoon train. 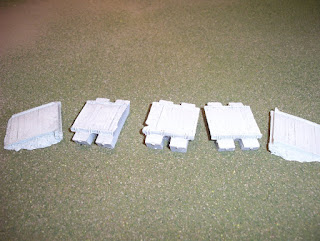 The bridge set is from Hallmark figures out of the UK. I purchased it on eBay last week along with a few other odds and ends (including some 15mm cats & dogs believe it or not). 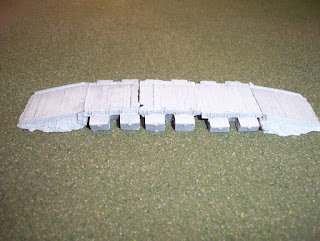 The bridge is a little rough on a few pieces and one small hole in the resin that I will have to even out with lots of sanding and green stuff. I'll be following up with another post once the set is completed.