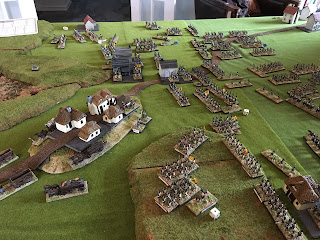 A couple of us decided to play the San Daniele scenario from the Italian theater of the 1809 campaign. Michael Hopper having done the research and the other player providing all the figures and terrain, all I had to do was show up and roll some dice. Having a day where I was consistently rolling low, I got the Austrian command and was charged with defending in a rearguard scenario. The baggage wagons were victory points if the French could manage to capture them and we had to protect our line of retreat. Fairly straight forward. 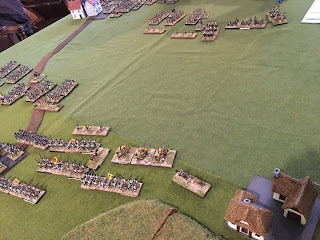 It had been a couple of years or so since I had played Shako II but my opponent was in the same boat. We managed to get through it and for the first few turns my Austrians had to remain on a defend order. The French appeared on the board over a few turns and fanned out to engage the entire Austrian line. The Austrian left flank appeared to be their primary interest and so the first real clashes came from there, following to the center. 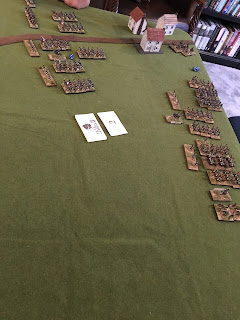 The French were taking some time to cover the distance. It can be seen here some French cavalry are along the flank and were to be a major nuisance in the game. After finally reaching contact with some Ausrian hussars, the first clash went to the Austrians. The French cavalry then permitted the infantry to press home the attack. The 5th Austrian hussars managed to break two French battalions who were unprepared and not in square. The Austrian cavalry's victories were short lived as the numbers of the French overwhelmed the useless Austrian artillery and made short work of the infantry attempting to back it up. The command managed to break after being demoralized for a couple of turns. 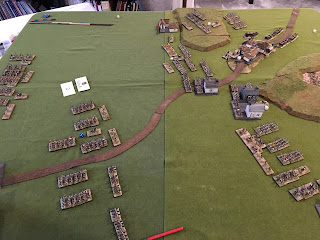 An early picture in the game around turn 3 or 4. The advance took a bit of time and we probably could have started the French a bit closer without fear or messing with the scenario too much. The time limit was 14 turns, but rolling from turn 11 and beyond to see if it ended earlier. Rolling as I did, the "1" did end the game on turn 11. 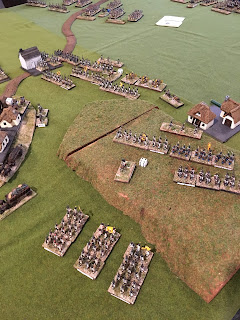 Rolling the 1 effectively gave me a victory sort of by default. We agreed to push and see how playing all 14 turns would be. Although the French managed to inflict further damage, they did not manage to take all the wagons or break the Austrians in entirety. It was a fun scenario that didn't follow the historical outcome but showed another possible result. I would have liked to have taken more and better pictures but all I had with me was my phone. We plan to replay the same scenario in May and maybe some additional pictures will get posted along with a possible different outcome.
Posted by Vive l'Empereur at 1:41 PM 2 comments: