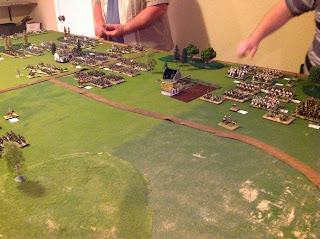 Using Lasalle, we tried a scenario outside of the normal scale of play. To do Montmirail, we had to do a few substitutions for the vast French guard units and artillery needed to play. Here is the center of the allied line with the Russian cavalry corps and with the infantry to the left of the picture. 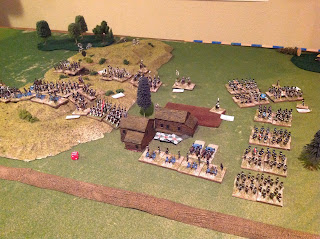 The Prussian corps on the far left of the allied line. The Prussians lacked the number of cavalry for fast exploitation against the weak French right, or heavy guns with which to use canister. Everything relied on the slow moving infantry backed up by the lone hussar cavalry regiment while the landwehr cavalry regiment was back on the hill. 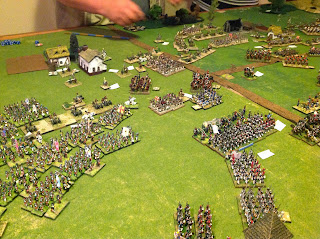 We see the Russian infantry trying to use their sheer number of battalions to simply drive the French back in a sweeping motion. French guard cavalry were quick into action here to try and use dense deployment against the Russians forming square. Sometimes it works, sometimes not so much. Russian artillery was generally ineffective in this scenario due to the inability to have line of sight to the enemy. 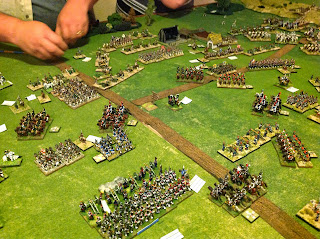 Some of the Russian battalions have disappeared it will be noted. The guard cavalry was probably handled a bit more aggressively than done so historically, but without it there was little hope of holding the Russian infantry back until the Old Guard made their full appearance. 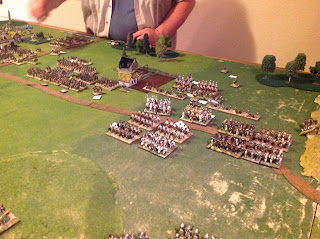 The Russian cavalry corps advances forward in a rush. The French have managed to pull up artillery on the hill opposite this line (part of which can be seen on the bottom left). One battery was silenced and the opportunity to move forward was now since all of the Russian artillery could not be deployed. The Cossack brigade on the right will receive a nasty series of clashes with guard lancers and part of the Empress's dragoons. 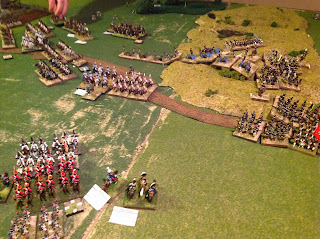 After several clashes in which the Russian cossacks were decimated, the guard lancers units were eventually smashed and driven from the field. The Russian cavalry managed to eventually obtain the upper hand despite the combat disadvantages. 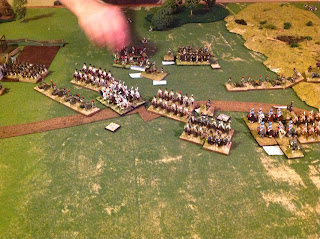 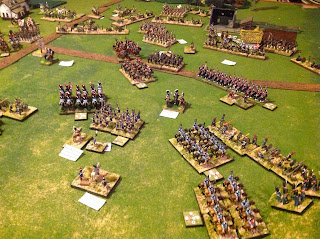 As the Russian infantry numbers dwindled toward the middle, the French guard advanced and pushed as far forward as it could. Russian artillery now having access to line of sight, managed to form a bulwark that halted the advance any further on this point.

Here we see the Russian hussar unit after it finished off the last guard cavalry unit and occupied the position. This inadvertently held up the guard infantry reinforcements here and they were forced out of march column to face the cavalry. Not pictured, the hussars behind are going to assault the artillery battery and start working on the infantry coming up, now without cavalry support. 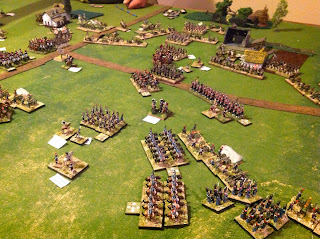 Here we can see the guard has managed to carve out a large area of domination on the Russian right. The village on the upper left has now been taken by the French and Russian infantry casualties have continued to mount. The center of the line proves to be too much for such a brazen use of the guard, but the guard do not die easily. 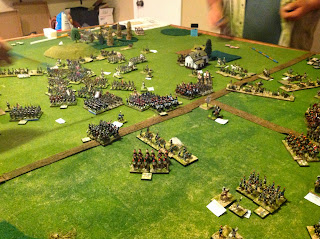 This image demonstrates the Russian line being broken in some areas in bitter fighting. Not having Russian cavalry here and having it all concentrated into a corps in the center of the line has proven that historically, the allies haven't yet mastered combined arms being necessary for victory. To the upper right, artillery is now able to deploy, but with no real expectation of any proper support.

The Prussian advance has finally made a noticeable achievement. The leading Landwehr infantry unit will be wiped out, but the remaining units are able to handle the incoming fire now that numbers can be brought to bear. The Prussian artillery has managed to temporarily silence the guard horse artillery batteries off and on during the game. The Dutch 2nd Red Lancers can be seen before their demise in the upper background, as previously mentioned before. We had to use artillery stands not properly based for the rules because the scenario called for so much artillery that we couldn't get it done in time for the game. As such, the space between the batteries was to maintain what would be the proper frontage.

A French battery forced to limber up from counter battery fire. Although the Prussian guns did little damage, they did prevent lots of French fire during the game and prevented any serious loss of the Prussian column. The last guard cavalry unit here (I guess other squadrons from the Red Lancers) is being occupied by the hussar cavalry regiment. Clearly a gamble on my part, but I knew the enemy would not risk attacking the infantry when they could be hit with cavalry with a counter charge at the same time. With the hussars being valiant, they were a fair match. 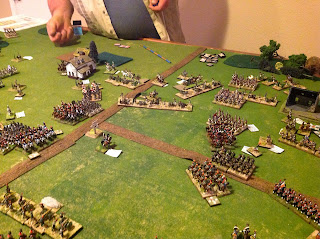 The guard cavalry can be seen attacking everything here. Before the advance of a Russian battalion toward the center to avoid being hit by their own artillery, an Old Guard battalion rushes some artillery. The attempt to cut the line in two seems to be working. 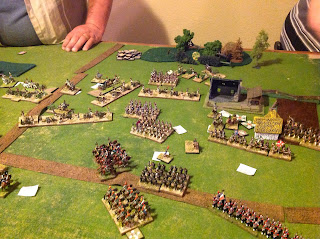 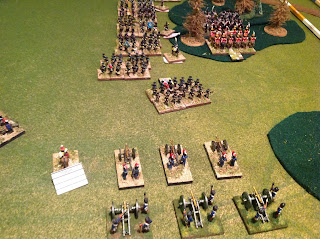 This image is taken as the last turn we played during the game. The hussar cavalry make a go at the lancers as they entered the woods and the landwehr at the bottom left, attack the limbered guard battery. We did not resolve combat here, but the guns were clearly going to be losses and the cavalry clash probably would have ended indecisively for me unless my opponent rolled poorly.

I had enough movement for both units to make contact on the single battery. Image appears to have been taken during movement, but the battery on the left is limbered (we did not have enough limber models, this why it is turned about) and will be hit with the landwehr cavalry and likely eliminated. 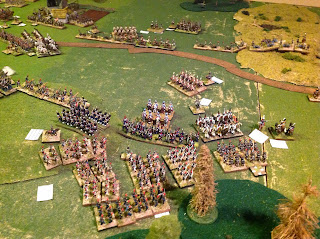 Here we have another follow up to an earlier attack but with the Russian hussars hitting another French battery. In the upper left, we can see two Russian cavalry units have charged the weakened (and almost broken) Old Guard battalion that had been such a battering ram. 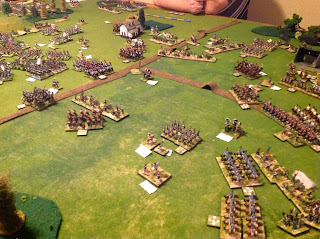 Another parting shot of the battle. My fellow player commanding the Russian infantry had to leave at this point and as we began counting the losses, we wonder how it would end. This is turn 16 of 20 and the Russians have lost 13 infantry battalions here. 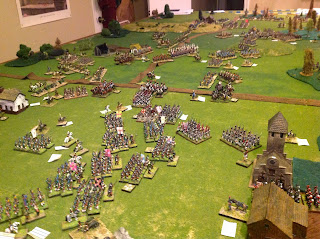 A parting shot from the French corner. Although it appears the Russians have a numerical advantage still, the losses the Russians have taken would have been too high for them to have stuck around any longer. The Prussians could have rolled up the flank given the sheer numerical advantage. The Russian cavalry held up the guard infantry in the center and Russian artillery able to deploy; but to what end? The French had possession of half or so of the objectives and much of the Russian infantry remaining was already suffering from disruptions. The close proximity meant the the Russian infantry had greater difficulty in rolling off disruptions.

One cannot call it a French major victory due to the guard cavalry be so mauled and the guns that would have been lost. It is likely though the Russians would have fallen back and left the field. The French would not have been able to launch any follow up (as the only cavalry left to speak of were not pursuit cavalry). Having 18+ unit losses from the allies and about half that for the French, we decided to call it a tactical French minor victory. Using a historical setup reveals some mistakes the allies made. Had the Russian infantry and cavalry been more evenly distributed, I believe things could have been different. Had the Prussian wing had a full brigade of cavalry from the Russian cavalry corps, the wing would have been turned quite quickly. But Prussian general Yorck was not in charge and Russian general Osten-Sacken's deployment was the leading cause of the historical and game's loss for the allies.
Posted by Vive l'Empereur at 9:53 PM 6 comments: