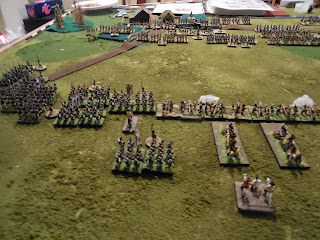 With our combined collection, we had the correct troop types to field the Austrian, Bavarian, Russian and Wurtemberg contingents to field the allied army for this game. This is a shot of the far Allied left, with a small Bavarian brigade to the left of the Austrians. This contingent is to move forward and claim Bar-sur-Aube village from the French garrison. 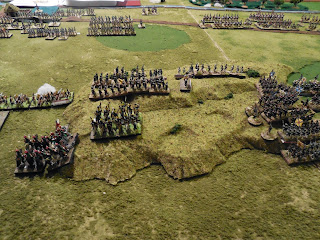 Austrian Grenzers, cavalry and Russian line troops on and around the hill. The Allies do not have any guard or genuine elite formations in this battle. The French have concentrated their cavalry in the center to keep the Russians at bay. 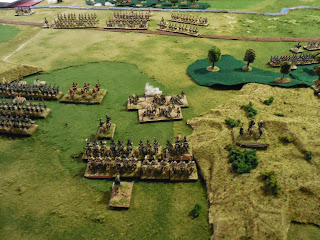 The Russians, like the Austrians, have a small cavalry brigade to support the attack. The Cossack unit is not worth much and except for their ability to move through bad terrain easily, won't do much in this battle. The Russians in unusual fashion, have but one battery present. 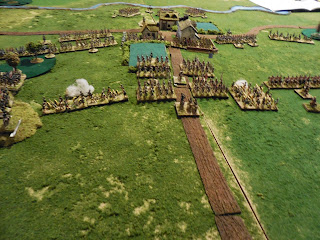 The Wurtemberg force has fairly good numbers for their attack to eject the French garrison of this small village. Fighting over villages and towns are always a bloody affair and this one will be no different. 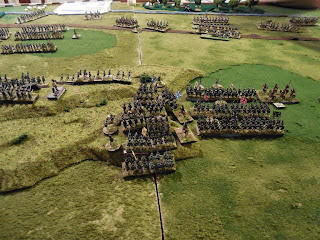 Here, Wittgenstein's Russians are pushing up to reveal themselves before the cavalry. Just off to the right here, the Russian artillery is being manhandled forward to get more of the enemy in their cross hairs. 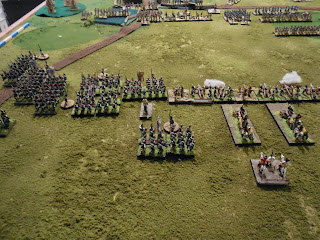 The three Bavarian battalions here are trying to rapidly march forward to deploy and seize the flank. The Bavarians here have one light battalion, one line and one militia battalion. The losses from the Russian campaign and 1813 fighting throughout Germany have taken away any proper cavalry or artillery support. The Austrian guns blaze away with no shortage of targets. 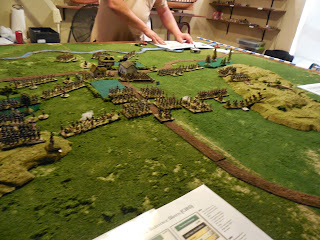 The Wurtemberg cavalry is moving along the hill to try and eradicate the French artillery on the flank. The infantry are massed up for a proper attack against the village while a French battalion tries to align itself for some shots. 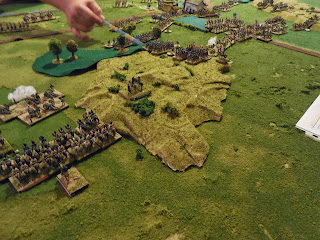 We can see a few other Russian battalions moving into the woods against a French battalion. The attacks here were repulsed throughout the game. These woods were a combination of a shield from Russian artillery and then a sponge sucking up units, 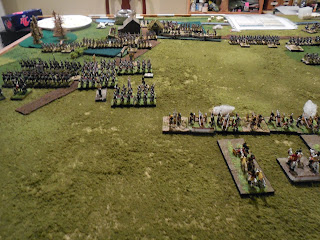 The Austrians and Bavarians are nearing Bar-sur-Aube. Between the two Austrian batteries, they have managed to try and sweep the opposition clear. The French in this sector are a bit weak but are in a good position. 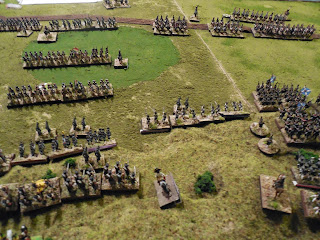 The French have decided to press the center by assaulting the Grenzers on the hill. The Austrian guns to the left of the hill, had manhandled their way to fire some canister into the approaching French to blunt the attack. For some reason, the leading French battalion has a non-existent skirmish value and canister and musketry damage was easier to inflict than normal. 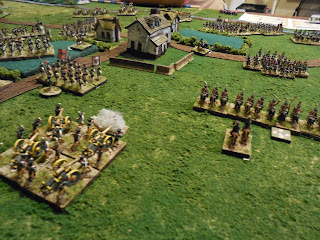 Guns blazing away manage to break one of the French garrison battalions, leaving it open for occupation. A French battalion forms square to ward off an attack by cavalry. There is suddenly a hole in the French line. 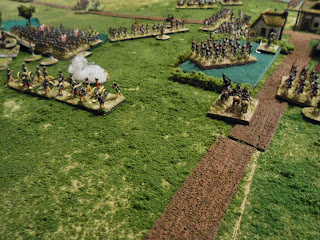 The Russians are pushing their assault into the woods in the hopes that numbers will prevail. The artillery here manages to drive back a French battalion from trying to get too close to the attack. Above, the French are now assaulting the village they just held but lost. 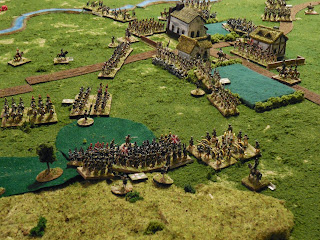 A better shot shows how the French are scrambling to repair the damage to their line. At the top of the picture, the French battery had fled the cavalry and forced to deploy at the rear of the line to keep the flank from just being turned and rolled up. 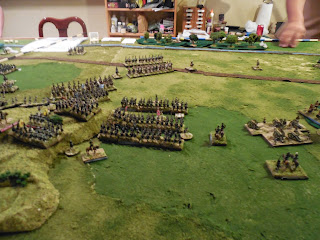 Here some Russian infantry fail to form an emergency square formation and manage to repulse the cavalry anyway. The French cavalry have been driven away from the path of the Russian artillery and so the guns are forced to turn to compensate for the hole that is now before them. 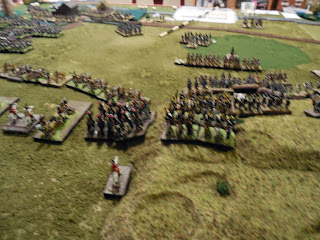 A little blurry, but the artillery and the musketry weaken the French battalion before they lose the combat and are broken. The Grenzers manage to hold their own here throughout the battle. Some other French battalions move up in front of the Austrian guns hoping to outflank the Austrian infantry assaulting the village. 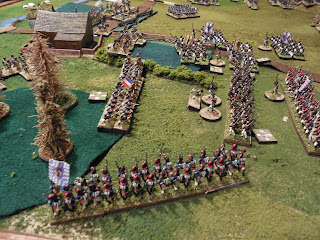 The Bavarian militia battalion has continued moving forward into march column in order to gain some advantage for their deficient morale. They will form into line in order to engage in musketry. The other Bavarian battalions have deployed into line to shoot into the French defenders before closing for melee. 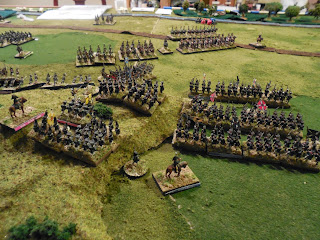 The French cavalry were bounced back and are working on preparing a new attack. Most of this section is a large holding action. The mass of cavalry prevents a large infantry advance and the Russians are trying to clear off the French battery off to the right of the picture, to shoot up the waves of cavalry. The French battery here would take some time to be destroyed. 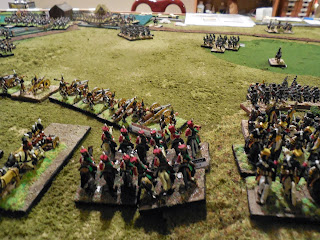 Austrian guns are targeting the French columns moving to intercept the Austrian infantry. Had the French not been shot up by the artillery batteries, they might have had better luck. 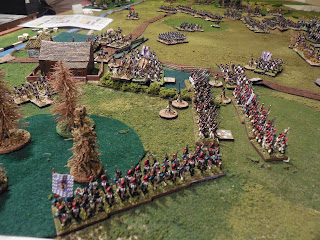 The French line standing before the village was shot up fairly well, charged, thrown back and shot up and fled. he Bavarian militia is now moving into the woods to make up for the lack of skirmisher cover that they don't have. The Austrians here are now entering a sector of the village and assaulting the other. 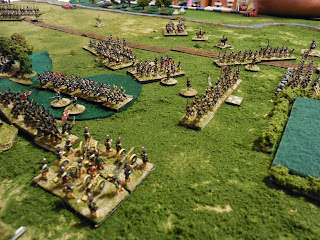 Here the struggle toward the center of the battlefield is still raging in a large stalemate. The French still posses their position in the woods and are preventing the Allies from using the woods as cover to continue pushing forward. 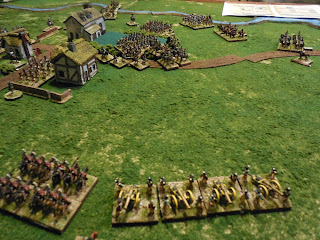 The French flank on this end has fairly well collapsed and is now bowed back at an angle. Lacking an appropriate limber model, the artillery battery at the bottom is limbered up to move forward now that the enemy has been pushed away. 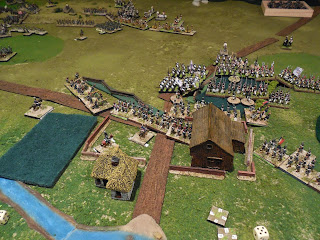 The two remaining battalions the French had here are trying to hold on. With the loss of one Frech battalion trying to thwart the Austrian attack, the other moves straight toward the artillery battery. The guns manage to obliterate it before contact is made. 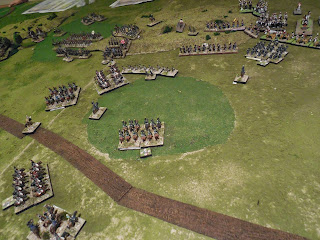 French cavalry are menacing the Austrian Grenzers. The Grenzers failed to form a square and are promptly routed. In the woods to the left, Russian and French cavalry clash. The Dragoons will fall back, leaving the Cossacks to try to hold the edge of the woods. 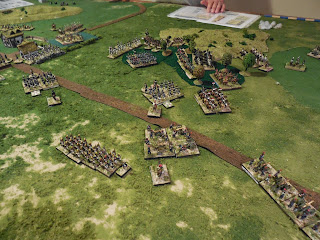 French cavalry charge and force the Russian battery to limber and move to the rear. The position of the cossacks makes the French cavalry retrace their steps as they fear a flank attack if they move forward. A second French battery is now moved up and doesn't have to worry about counter battery fire. 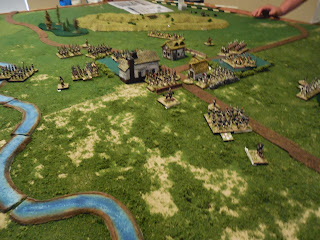 Some of the Wurtember assailants have been broken inside the village by French counter attacks. Although the situation is far from stablized, the French have bought time. 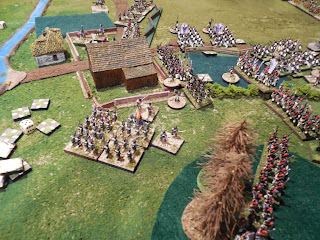 The French column is preparing to counter the Bavarian unit about to enter the empty sector of the town. Should the French fail, they will be quickly find themselves hit from the rear by the lurking Bavarian militia battalion now able to move through the woods unhindered. 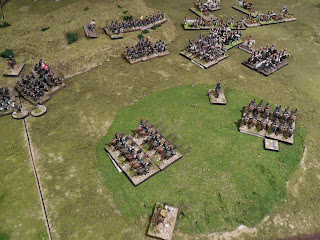 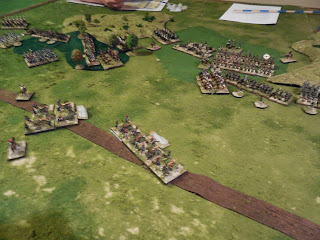 Cossacks are up against the French in the woods. The French manage a draw, but will fall back slightly. The Russian battery is back in order and will soon eliminate one of the French batteries this turn. The French cavalry manage to eventually destroy this Russian battalion after a second attempt. 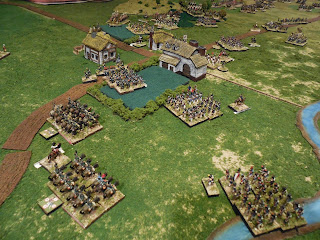 Final assaults on the village. The French manage a hollow victory by maintaining the villages, but suffering far more losses that cannot be so easily replaced. According to the scenario, it is still deemed a French minor victory.
Posted by Vive l'Empereur at 6:30 AM 3 comments: