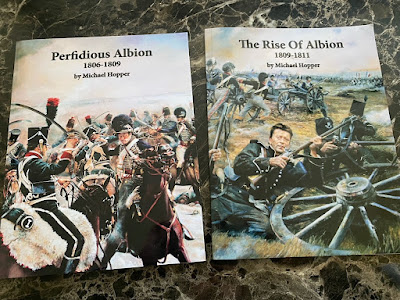 Today's post will focus on the two new scenario books from the prolific scenario book writer, Michael Hopper. I have reviewed previous scenario books he has put together and now we have two for the interim years after Austerlitz and the 1812 Russian Campaign. These two books are centered mostly around the British aggression all over the globe during this period. 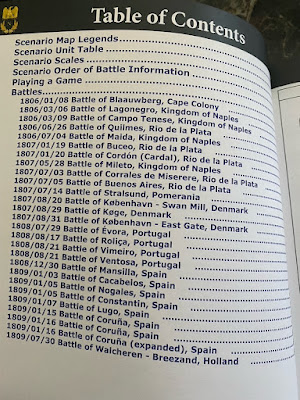 Perfidious Albion deals with the most global scenarios. If you've gotten a little tired of your British only fighting in the Iberian Peninsula, then this book is for you. You will be required to find some substitute units unless you have Danish, Kingdom of the Two Sicilies and odd Spanish militia suitable for South America. As seen above, there is quite a span of localities to choose from and arranged in chronological order. 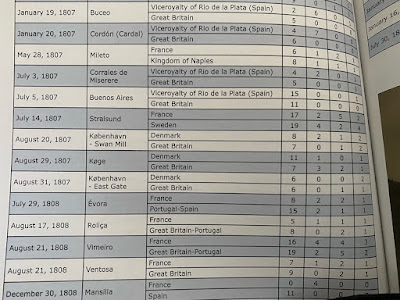 One of the nice features of Michael Hopper's work is this quick reference chart for the number of units needed for a scenario. For those who have limited numbers of figures available, you can easily narrow down or plan for what is needed for any particular scenario. 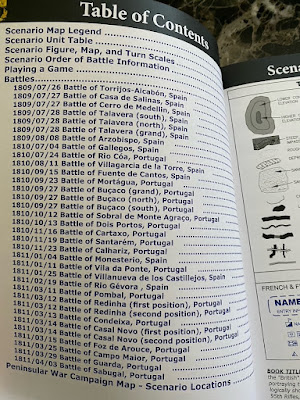 The Rise of Albion offers you the opportunity to fight sequential battles during some of the formative years of the British army's ascendancy. If you are considering a campaign among a group of dedicated gamers in your group, refighting the historical battles in order can be done. You don't need to spend lots of time digging through Oman's exhaustive volumes looking for maps and orders of battle. Some of these scenarios are just between Spain and France. 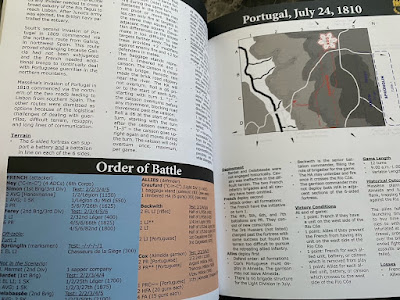 The scenarios are written with the wargamer in mind. With an order of battle that can easily be translated into almost any rule set of your choice, the books offer a lot of value. Time scales are provided for the number of turn and the time the battles lasted. Depending on your rule set, that may not require any adjusting. The research part of these battles has been done and is easily laid out where you can setup and finish a scenario with a clear understanding of what victory conditions are for each side. 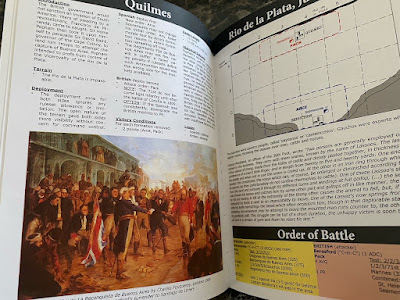 The size of the battles vary. Just as the size varies, the topography also offers variety to make interesting games or to suit what you have available. So if you're a beginner or a long time collector, you will find opportunities for your collection. 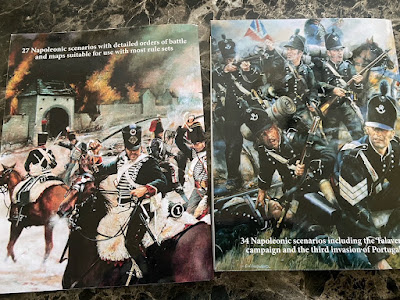 The back of the scenario books are just as beautiful as the cover. If you have any of Michael Hopper's previous scenario books, you will be familiar with the detailed explanations and layout of the books.

If you're interested in adding either or both of these books to your collection, contact Michael Hopper directly and find what the shipping and exact charges are for your country. log1cal.mh@gmail.com

Email ThisBlogThis!Share to TwitterShare to FacebookShare to Pinterest
Labels: Review