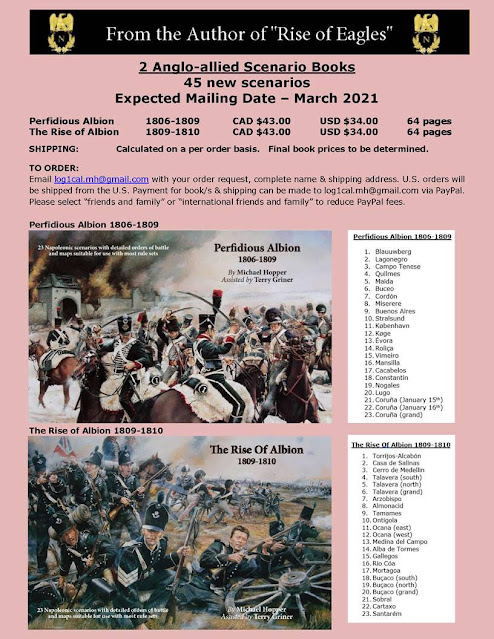 Announcing a couple of new scenario books that cover any Napoleonic rule set. These books are now available for preorder. If you have any of the previous scenario books from Michael Hopper, then you know the detail and quality of the material presented.

I have reviewed previous books on this blog http://thepeninsularwar.blogspot.com/2018/05/new-napoleonic-scenario-books.html and http://thepeninsularwar.blogspot.com/2017/12/review-eagles-over-bavaria-duel-of.html So if you want new material and wish to continue supporting the hobby, please take a moment and consider purchasing these books from Michael. You can contact Michael for a purchase at log1cal.mh@gmail.com.

As with previous books, when my copies arrive, I will do a full review of the books. If you know other gamers who would be interested, please share this information with them. Good scenario material that works with any rule set is not common enough. If you have ever wanted to put on a historical scenario and have found that the information available is sketchy or time consuming to put together, save yourself the trouble. 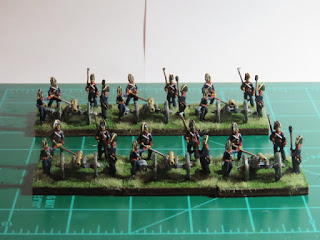 So during the last several months, my laptop has been down and with the Covid situation, I've had a lot of time. I have managed to get plenty of things done. I had been wanting to replace the Spanish artillery I had with Battle Honors so as to match what I already have. 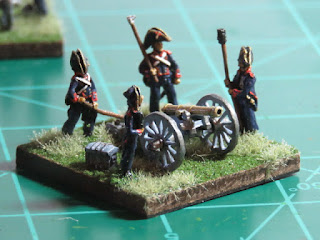 I decided to just paint and add the trail ammo chest. Gives a little more detail to the stand. It would have been nice is the set had opened chests, but I guess that wouldn't look good for putting it on the trail if someone wanted to do so. 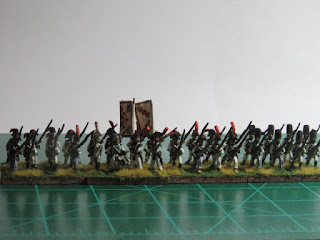 I didn't need to paint another infantry unit but the Battle Honors figures are quite nice and I did have one last set of flags that needed to go somewhere. I decided to do this unit with green facings, since I didn't have a battalion with those colors. 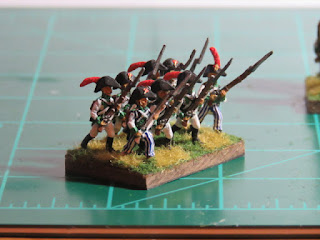 Rather than just paint dull brown pants on some models for the worn look, the tiki striped pants were common enough. With a good bush, steady hand and free time, it isn't so bad. 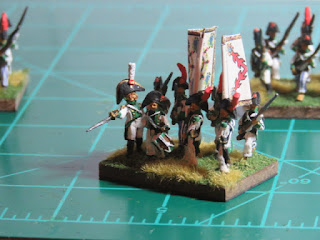 Each bag contains three sets of command. In of itself, that's not bad. What's not real useful is that the command figures are identical and so you don't have an option for a different officer. A small matter to be sure, but Tony Barton did go so far as to model some soldiers with either no shoes or sandals. 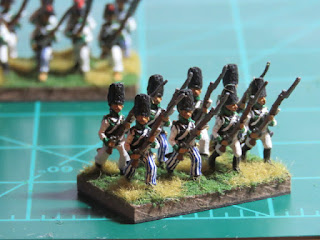 It only occurred to me after I uploaded the pictures and put everything up, but a rear shot of the grenadiers would have been good. I did paint the elaborate flamme according to other designs I could find online. When I get them onto a table some day, I'll capture a shot of them from the rear.

Posted by Vive l'Empereur at 7:19 PM No comments:

The Alamo scenario is a game that most people would presume is a forgone conclusion. How could the defenders win? As it turns out, if they had inflicted enough loss upon Santa Ana’s army, then it would change the course of future events. That was the scenario we had planned along with the historical setup.

Not having enough Mexicans to represent the force, command stands with Mexican flags along with French line infantry were used. At this scale, it seems to work just fine. All the Alamo defenders were represented 1:1. The western wall would be overwhelmed, but not before chewing up most of the attacking companies.

The northeastern corner was where the slowest progress was made. Part of the walls did not require scaling ladders, but the gunfire here was intense. To the left of the picture in the Chapel, cannon fire aided the defenders from a higher elevation.

The result was a bit surprising, but did make sense. The cannon inside the Alamo made the real difference. Those guns could cause enough damage to blow away platoons with ease. Since the defenders were fighting unto death, they did not need to worry about morale or a line of retreat. The defenders had the advantage of a target rich environment along with hard cover. After six hours of playing, Santa Ana got his Pyrrhic victory. The defenders saw to it that the army Santa Ana walked away with was greatly reduced.
Posted by Vive l'Empereur at 4:34 PM 4 comments: